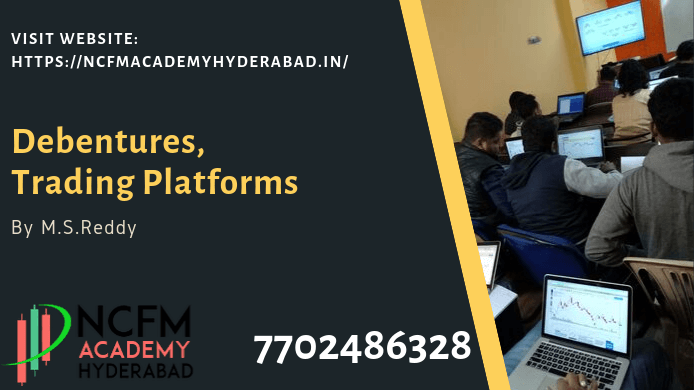 Debentures are nothing but the shares that have fixed returns irrespective of the price of the company; it gives returns just like the FD, ranging between 5% – 15% per annum generally.

Nowadays, even debentures can be transacted online.

Note: Whether the company shows the loss or profit the returns to the debenture shareholders always remains the same.

Convertible Debentures: This kind of debentures over a period that is already stated, gets automatically converted into shares.

Optionally Convertible Debentures: This kind of debentures over a period can be converted to shares else can be redeemed for the price paid up for the debenture.

ESOP: Employees Stock Options Placement – Issuing the shares to the employees as a bonus along with the salary.

It is further divided into:

Intraday trading: In this, the buy-sell transaction is completed within the day itself.

For High Market Capitalization Companies, one can also sell before buying if he feels that the company price can come down by the end of the market session, but eventually he has to buy it before the closing if he forgets that, then the shares go for auction and penalty up to 20% is levied on it.

When you first did the buy transaction and did not sell on the same day, then these shares are treated as delivery.

Margin: The cash balance you hold with the stockbroker.

For intraday trading, various stockbrokers allow up to four times the exposure of the margin and for delivery, they allow two days grace period called as T+2.

Note: The margin exposure varies from stockbroker to broker and from company to company.

If the client fails to put the margin within T+2, he will be charged the penalty for each day after it, and some stockbrokers also have the mechanism for auto-sell of holdings.

Note: Never indulge in extra margin fund buying (buying more than the margin in your account).

The intraday trading is just like Legal gambling, wherein, more than 90% of clients lose the money to the 10% share market tycoons.

It is strongly advisable to trade only in the delivery segment.

If the seller is done before buy, then it termed as ‘Short’.

During the bankruptcy, the shareholders get the least preference to get the money, the priority of giving the money is as follows:

Real-time Example: KFA – Kingfisher Airlines after years of operations fails to pay the interest on loans it has taken from several banks and organization, such condition is termed as bankruptcy, it winds up its business, the total loan it had made is saying, 2000 crore, its property after auction fetches it 2500 crore, then firstly of the 2500 crore, 2000 crore would be given to all the banks and organization where it has taken loans and the of remaining 500 crores, the debentures will get their money first say it is 200 crore, then the leftover 300 crore amount will be divided by the number of shares, that is what you would get.

Secured Loans: Which is against the property.

Unsecured Loans: Which is without any security. The interest rate on unsecured loans is very high.

Never trust the companies that have massive unsecured loans.

Note: Promoters also raise the money from banks by pledging (mortgage) their shares; this is the last option they have to raise funds for their business.

Note: Never trust companies that have a huge number of shares pledged, the pledging is done at a huge discount price compared to CMP, if the CMP falls below the pledge price, the banks start selling the shares in the exchange.

Debt-free companies are the ones who have no loans at all.

Reference: In money control goes for,

Financials to check the assets and debt of the company.

For pledging of shares, one can check in ‘shareholding pattern.