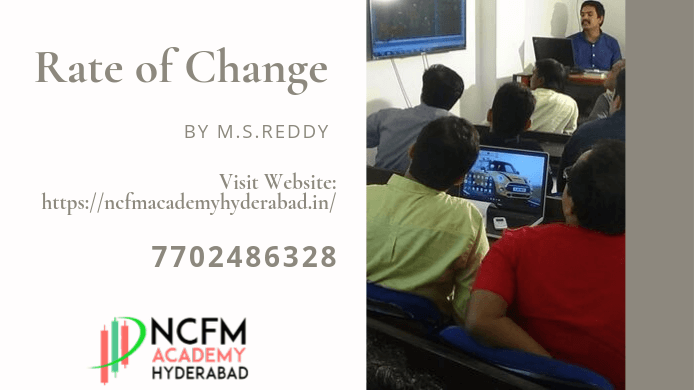 The term Rate Of Change is defined as the rate which describes how one quantity changes relating to another quantity. If “x” is considered to be an independent variable, then “y’ is called the dependent variable.

So, the rate of change can be defined as –

Rate of change – change in y

The rate of change can be either positive or negative. When the quantity doesn’t change with time, then it is called zero change rates.

Rate of change with relating to an oscillator

When a rate of change is considered as an oscillator, remember that it is one of the simplest indicators available. It is considered as the change in the price over the specified duration of time. The difference in the cost is then added to the RSI oscillator style, and then it is shown on the chart as the regular line.

Though ROC seems to be very simple, yet it is very profitable. In fact, it can be applied like any other indicator in various ways. On the other hand, it can also be used as the oscillator with divergence trades.

ROC as a cylindrical indicator

To improve your trading, here is a quick as well as an easy way to improvise your portfolio. By making use of the rate of change along with your own and proven strategies, you will be able to achieve profit in the trade market much easily without any hurdles.

Initially, add ROC to the chart window for the duration of, say about 12 days. In the next step, take a look regarding how ROC changes on a regular basis or even during the culmination of weeks. Often stocks with the highest volume which flow around the same ROC ups and downs over the period. So, this circular pattern helps you in finding the tops and bottoms or even if you have any other proven strategies which turn up without anything.

ROC with relating to other strategies

When ROC hit a perfect level, profit can be easily fetched even before the market reverses. In fact, ROC is deemed to be much perfect for the purpose of setting the trading goals. In fact, you can also make use of the rate of change indicator to see whether every percentage bar with relate to time correlates with your goals or not.