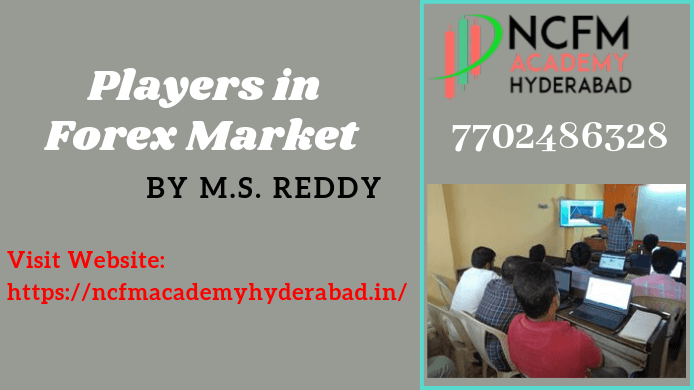 Major participants involved in Forex Markets are explained below.

Central Bank: – With the directives from the government, central banks like RBI monitors the situation of the foreign funds, have a hold on the exchange rates, CRR, inflation, interest rates, and other deciding factors which influence the Forex Markets. In some countries, these institutions will be independent of the government whose involvement in Forex markets is nothing.

Normal Banks:- People can exchange the currencies with these banks at the rates set by the Central Bank.

Companies: – Multinational companies like Coca Cola or Pepsi, Ford, etc. operate across the globe, and there is a need for them to exchange currencies across frequently. In some situations, companies need to pay money in long durations. But the exchange rates might also change during these payment processes. To get out of the situation, banks will fix a certain rate at which the companies will exchange the currencies in the future. This whole process is called Hedging.

Hedge Funds: – These are the companies that are assigned to speculate on the Forex Markets and bring profits to their investors. These companies will charge a fee from those who want to invest in the hedge funds in return for the profits.

Normal Traders: – General people who have a knowledge of the forex markets, can speculate the moments of these markets to earn profits by investing in Forex.