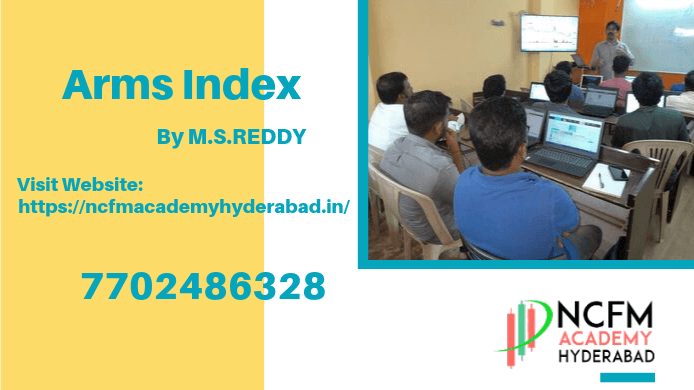 Arms Index is another acronym for the Trading Index, and it was developed in the year 1967. It is nothing but the volume-based indicators which determines the market strength and breadth by thoroughly understanding the relationship between the advancing as well as declining issues and also their respective volume. It is used to measure intra-day market supply as well as demand. It can also be applied over the specific duration of time. But primarily, it is used as the short-term trading goal.

The issues with Arms Index

The concept of Arms index has certain mathematical peculiarities which the investors and traders should be aware while using it. Since Arms Index mainly emphasize on volume, the inaccuracies arise when there is no other advanced volume poured into the advancing issues as it is expected. Though this may not be considered as a typical situation, indeed it is a situation which can quickly arise and make the indicators unreliable.

Here are a few scenarios where actually problem can occur-

In this relate, the only way to the left to solve the issues is to separate the components of the arms index into volume rather than using it in the same question. For example: Let’s consider advancing issues is divided by the declining issues, and it could show one particular trend whereas the advancing volume over the declining volume could be seen as a separate trend. These ratios are called as upside/downside ratio and advance/decline ratio.

It should be noted that never rely on just one indicator and have the strong fundamental understanding regarding the current market trend and the factors affecting it. In case, if there is any, it might emerge or change the current perceptions on the fundamental valuations.

On the other hand, from the technical point of view, it should be noted that prior trading, it would be better to wait for the cost confirmation from various indicators as well as the marketing data.

The Arms Index is indeed a great volume-based indicator used by traders as well as investors while going thoroughly through the market supply as well as the demand dynamics. Usually, reading above 1.0 is considered as bearish; below 1.0 is deemed to be bullish. Anyways, the investors should be aware of the fact that there are only a few instances wherein the index gives unusual readings and bear in mind that none of the indicators should be used alone without considering any other market factors or waiting for confirmations.